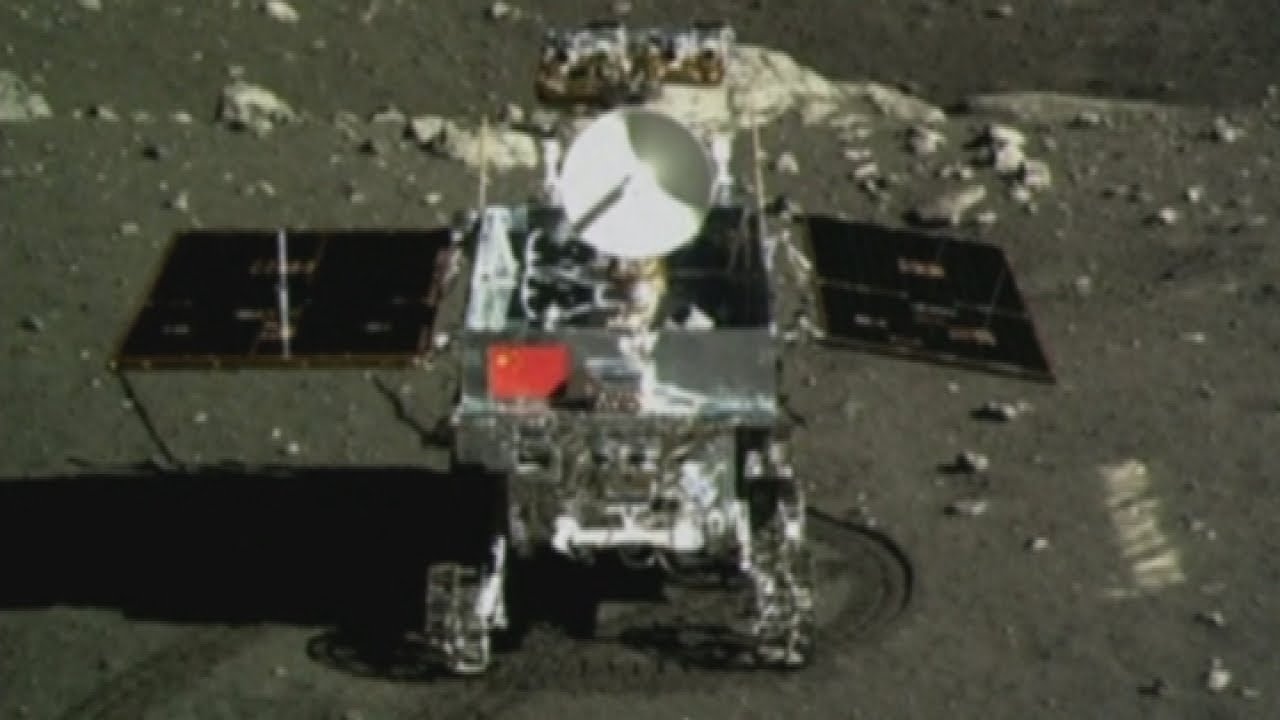 Footage of China's Jade Rabbit rover landing on the moon has been released, along with the first photographs of the rover and lander. 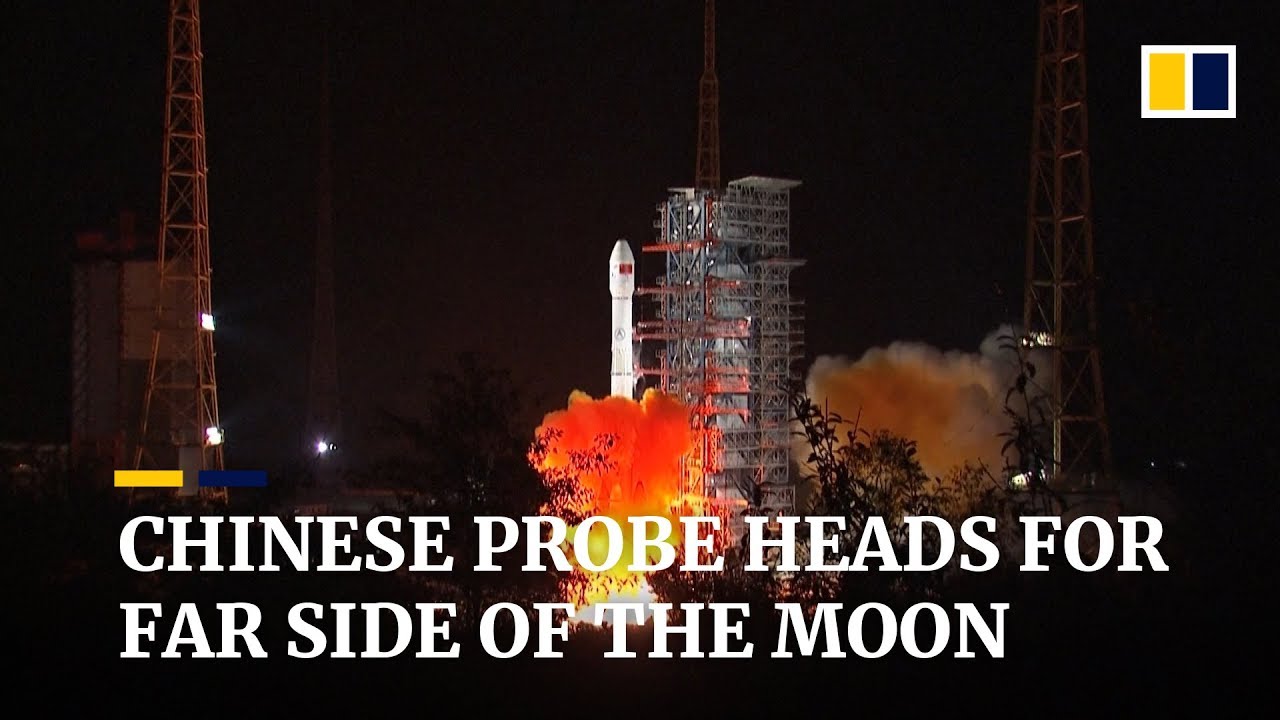 Yutu is an unmanned lunar rover that formed part of the Chinese CHANG'E 4 mission to the Moon. 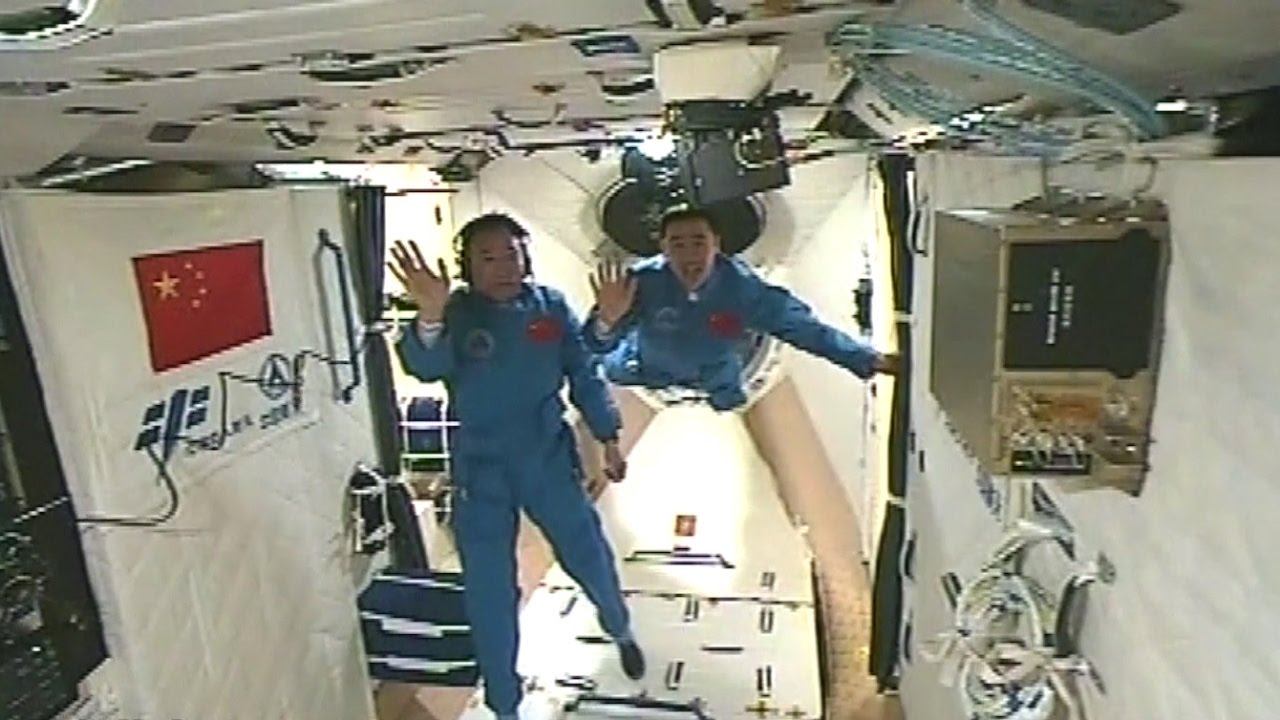 The Shenzhou-11 (神舟十一号) manned spacecraft docked with the Tiangong-2 (天宫二号) Tiangong-2 and will remained for 30 days. 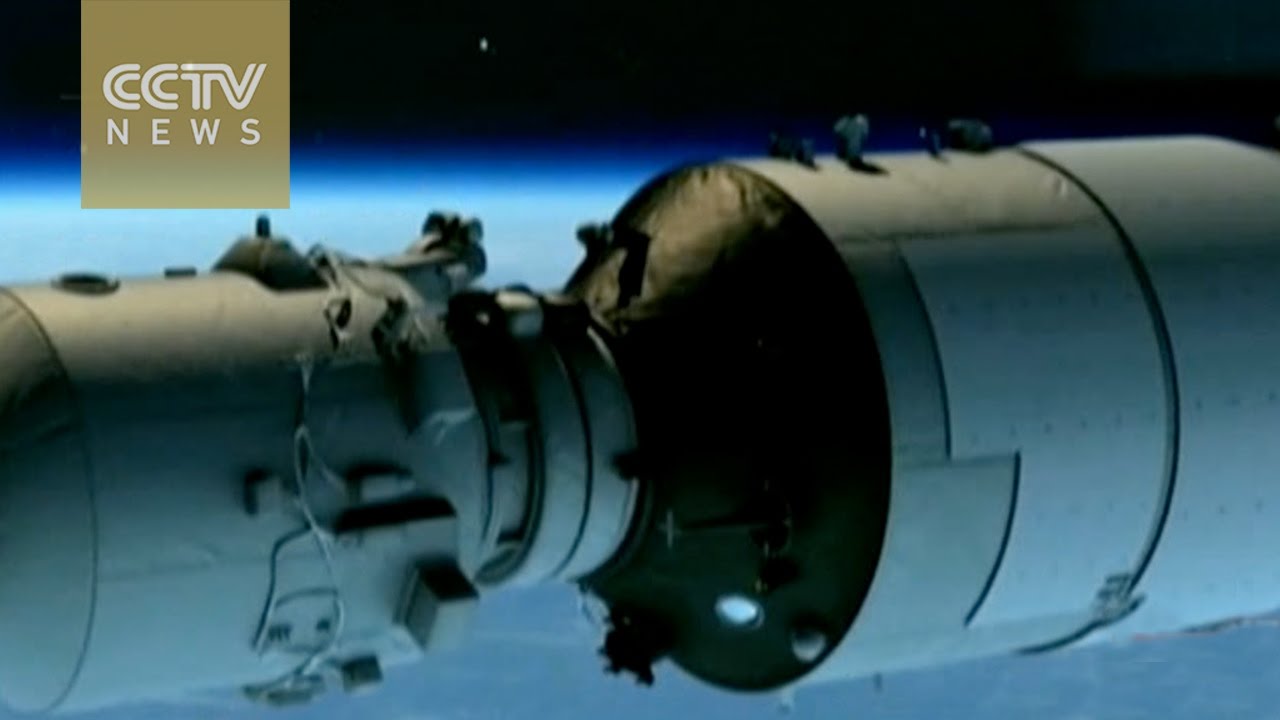 An accompanying satellite was launched from China's Tiangong-2 space lab.

WeatherMinds - Chinese space station
The new space station is about the size of a semi trailer and will be visible tonight just after 10 p.m. kare11.com/weatherminds Welcome to the official YouTube channel of KARE 11 News. Subscribe to our channel for compelling and dramatic storytelling, award winning investigations, breaking news and information you can use. » Subscribe to KARE 11 on YouTube: https://www.youtube.com/subscription_... » Watch more KARE 11 video: https://www.youtube.com/user/KARE11/v... » Visit KARE11.com: http://www.kare11.com/ » Download our app! https://www.kare11.com/appredirect/ » Find KARE 11 on Facebook: https://www.facebook.com/KARE11/ » Follow KARE 11 on Twitter: https://twitter.com/kare11 » Follow KARE 11 on Instagram: https://www.instagram.com/kare11/

CNSA releases images of Tianwen-1 spacecraft landing process
For more: https://news.cgtn.com/news/2021-05-19/CNSA-releases-images-of-Tianwen-1-spacecraft-landing-process-10oFMD0DAlO/index.html On May 19, 2021, the China National Space Administration released images of the separation and landing of China's first Mars probe, the Tianwen-1. In the images, the landing platform and the "Zhurong" rover's departure ramp, solar wing, antenna and other mechanisms are in place. Subscribe to us on YouTube: https://goo.gl/lP12gA Download our APP on Apple Store (iOS): https://itunes.apple.com/us/app/cctvnews-app/id922456579?l=zh&ls=1&mt=8 Download our APP on Google Play (Android): https://play.google.com/store/apps/details?id=com.imib.cctv

China’s Space Exploration Ambitions
May.17 -- China’s deep space ambitions made a significant leap forward on Saturday with a successful landing of a rover on the surface of Mars. Bloomberg’s Stephen Engle reports on “Bloomberg Markets: China Open.”

Live: Explore China's "Mars Town" 探秘世界最像火星的地方——青海冷湖火星营地
China's Tianwen-1 probe touched down on the Red Planet on May 15 and the rover Zhurong is expected to roll out from the lander and begin scientific exploration. The mission is unmanned and it will take humans a while to set foot on Mars, but a town in northwest China's Qinghai Province is the next best thing. Dubbed "Mars Town," Lenghu boasts vast stretches of desolate lands in the Gobi Desert. CGTN reporter Wu Lei puts on a spacesuit and explores a Mars simulation base there to learn how the place is helping us understand future life on Mars.

What more challenges are China’s 1st Mars probe facing?
The next steps on Mars are also very critical to China’s Tianwen-1 and Zhurong rover, what will they do, and how they can survive after landed on the Red Planet?

What to expect from China’s first Mars mission?
If everything goes as planned, China's Tianwen-1 and Zhurong will carry multiple #scientific missions on #Mars, aiming at searching evidence of life, and the Martian environment.

What can we learn from the history of Mars?
When scientists searching for details on the Martian surface, they can see the features of ancient flowing liquids, which suggests that the planet was completely different as it is today. However, the more we learned about Mars, the better prepared we’ll be to live there, one day.

Why is Mars most likely our “New Earth”?
Humans are working on sending spacecraft to planetary neighbors since the 1960s. Through decades of explorations, Mars has long been considered capable of hosting ecosystems, and a possible destination for humans to reach.

China’s 1st Mars probe How was Tianwen-1’s landing spot on Mars chosen?
The south of Utopia Planitia is where China’s first successful Mars probe Tianwen-1 landed over the weekend. Why did the Chinese scientists pick this specific landing spot? We are here to find out.

China spacecraft makes successful landing on Mars | DW News
China has landed a spacecraft on Mars – the latest step in its ambitious space program. The Chinese rover will stay in its lander for a few days of tests before exploring the Red Planet. The rover has yet to send back any images from Mars, but here's the story of how it got there -- and what the mission aims to find out. After a treacherous journey through the Martian atmosphere, the Chinese spacecraft Tianhe lands safely on the red planet. A major triumph for Beijing's space ambitions, and the culmination of years of hard work. "This was not an easy task. It's our first time down this path, and we have encountered many difficulties. It was through a lot of hard work that, today, we were able to make our goals a reality. I'm delighted. This is a key event for the China Aerospace and Technology Corporation. This is the Chinese people's first rover landing on another planet." The Zhurong rover on board will explore an icy area of Mars known as Utopia Planitia. It was formed by the violent impact of an asteroid about four billion years ago. Past space probes have discovered large amounts of frozen water under the surface here. An enormous layer of ice lies only a few meters below the surface. Using radar, Zhurong can precisely measure the underground ice. The rover is named after the Chinese god of fire. Eight days after landing, when diagnostic tests are finished, it will go into action. NASA's two Mars robots use similar high-tech equipment to Zhurong. Even though NASA research takes years, Zhurong's mission will be short. For three months, the rover will explore the surface of Mars, measure its magnetic field and study the properties of weathered Martian rock. The probe will then forward the collected data back to earth, to a ground station in China. Subscribe: https://www.youtube.com/user/deutschewelleenglish?sub_confirmation=1 For more news go to: http://www.dw.com/en/ Follow DW on social media: ►Facebook: https://www.facebook.com/deutschewellenews/ ►Twitter: https://twitter.com/dwnews ►Instagram: https://www.instagram.com/dwnews Für Videos in deutscher Sprache besuchen Sie: https://www.youtube.com/dwdeutsch #China #Mars #Space

China lands its Zhurong rover on Mars - BBC News
China has successfully landed a spacecraft on Mars, state media announced early on Saturday. The six-wheeled Zhurong robot was targeting Utopia Planitia, a vast terrain in the planet's northern hemisphere. The vehicle used a combination of a protective capsule, a parachute and a rocket platform to make the descent. The successful touchdown is a remarkable achievement, given the difficult nature of the task. Only the Americans have really mastered landing on Mars until now. All other countries that have tried have either crashed or lost contact soon after reaching the surface. Chinese President Xi Jinping congratulated the mission team on its "outstanding achievement" in a special message. Please subscribe HERE http://bit.ly/1rbfUog #China #BBCNews

China lands its first rover on Mars in latest advance for space programme
China has landed a spacecraft on Mars for the first time in the latest advance for its space programme. The official Xinhua News Agency said on Saturday that the lander had touched down, citing the China National Space Administration. Plans call for a rover to stay in the lander for a few days of diagnostic tests before rolling down a ramp to explore an icy area of Mars known as Utopia Planitia. It will join an American one that arrived at the red planet in February. Read more: https://www.telegraph.co.uk/news/2021/05/15/china-lands-first-rover-mars-latest-advance-space-programme/ Subscribe to The Telegraph on YouTube ► https://bit.ly/3idrdLH Get the latest headlines: https://www.telegraph.co.uk/ Telegraph.co.uk and YouTube.com/TelegraphTV are websites of The Telegraph, the UK's best-selling quality daily newspaper providing news and analysis on UK and world events, business, sport, lifestyle and culture. #Mars #China #Space

China Lands Its Rover On Mars, Only Country After US To Do So
China has successfully landed its spacecraft “Zhurong” on the red planet, its state media reported. This is the first time China has landed a spacecraft on Mars. China has become the second country to successfully land its rover on Mars after the United States. China’s space agency said that the rover landed after ‘nine minutes of terror’. 'Nine minutes of terror' is the time interval where scientists on earth had no control over the rover due to signal delay. Scientists at the control centre applauded each other after confirming that the spacecraft had landed successfully. #ChinaMarsMission #ZhurongRover #ChinaLandsOnMars Crux is your daily dose of the big, viral and relevant news in a few minutes. It’s your ultimate guide to staying informed on the latest in politics, international relations, sports, entertainment and social media Follow CRUX on Instagram (@crux.india): https://bit.ly/3qSFx1K Follow CRUX on Facebook: https://bit.ly/2Lte7iF #GetCloserToTheNews with latest headlines on politics, sports and entertainment on news18.com https://bit.ly/2Y4QccL Also watch: Crux One Take: https://bit.ly/3oNaLWf Crux Files: https://bit.ly/3mnbnjW Crux BTS: https://bit.ly/3oCjbQE
«
previous page
1
/
31
next page
»

How scientists are making air from lunar dust

Returning to Venus and Getting a Closer Look to Ganymede

Detailed Proof of Dark Matter/Dark Energy Released, But Something Is Odd
«
previous page
1
/
212
next page
»