The surface of Mars, as seen by the Curiosity Rover – NASA 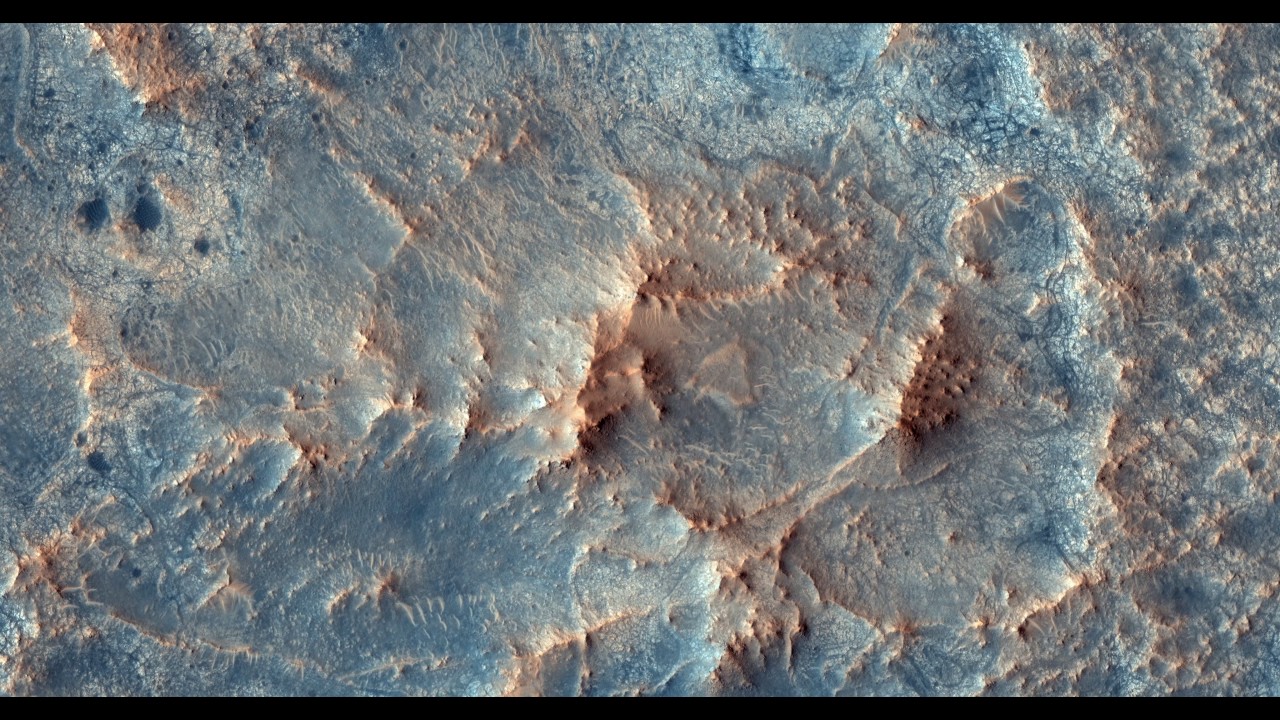 Stunning Ultra HD 4k images of the surface of Mars. The MRO is a multipurpose spacecraft designed to conduct reconnaissance and exploration of Mars from orbit. 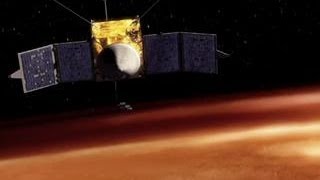 Maven, currently in Mars orbit, was built to examine the atmosphere of Mars in order to help scientists understand the planet's relatively unknown history. 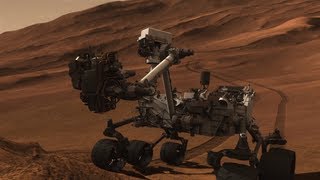 Curiosity captured this 360-degree panorama of a location on Mars called “Teal Ridge”. This location is part of a larger region the rover has been exploring called the “clay-bearing unit” on the side of Mount Sharp, which is inside Gale Crater. 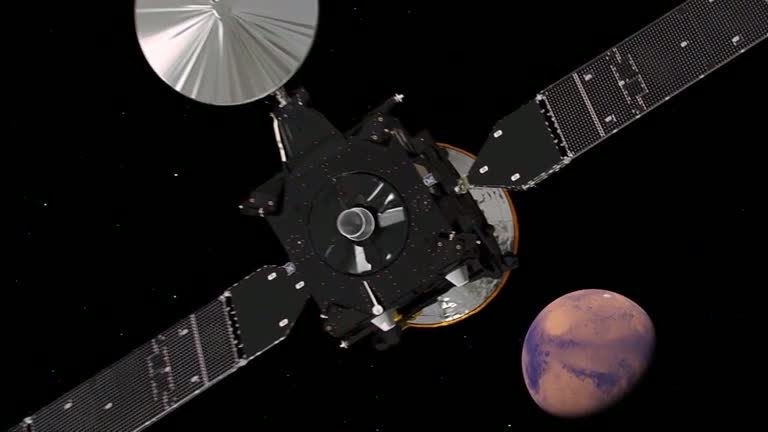 ExoMars is several missions in one. Its orbiter is a science and relay mission. The TGO will search for evidence of gases, such as methane, that may be associated with geological or biological processes.

HiClip mini 4K: A Journey near Nirgal Vallis
These ridges and channels are in a light-toned unit near Nirgal Vallis on Mars. The ridges are very well exposed at this location. The unit contains inverted craters, which are uncommon. This is plausibly a water-altered ash deposit emanating from the fissure to the northeast. (This is a non-narrated clip.) Music: “Rage” by the 126ers. (Used by permission.) NASA/JPL/UArizona https://www.uahirise.org/ESP_057537_1540 (Less than 5 km across. For scalebars, see the above website link.)

Why NASA's Perseverance Will Change Everything We Know About Mars! (Nerdist News w/ Dan Casey)
NASA's latest mission to Mars could potentially change everything we know about our little red neighbor. Dan blasts off to break down all the details on this episode of Nerdist News! What do you think Perseverance will find on Mars? Let us know in the comments!

Neil deGrasse Tyson and NASA Chief Scientist Explain New Mars Rover
Earlier in the day today, @NASA successfully launched their latest Mars rover, Perseverance. Now that it’s rocketing its way to Mars, we’re here to explore what it will do once it gets there. Neil deGrasse Tyson and comic co-host Chuck Nice are joined by NASA Chief Scientist James Green, PhD, to break down what Perseverance will be doing once it touches down on the red surface. Firstly, why launch now? James tells us why this is the perfect window to launch to Mars. You’ll learn why NASA is targeting to land Perseverance on an ancient Martian shoreline. We discuss why our own evolution history helps inform us where to land the rover. Find out the logistics of how Perseverance will land on the Martian surface. Will we experience a similar six minutes of terror like we experienced when Curiosity made its descent? James explains why the landing procedures may sound crazy but they actually make “fantastic sense.” You’ll hear about all the different experiments attached to Perseverance including a rock corer, high-tech cameras, and a ground-penetrating radar. Lastly, James tells us about Ingenuity, the tiny helicopter accompanying Perseverance on this mission. All that, plus, find out why James is excited to have a microphone on-board Perseverance. Image credit for background of Mars Perserverance Rover: NASA Support us on Patreon: https://www.patreon.com/startalkradio Subscribe to StarTalk: https://www.youtube.com/user/startalkradio?sub_confirmation=1 Follow StarTalk: Twitter: http://twitter.com/startalkradio Facebook: https://www.facebook.com/StarTalk Instagram: https://www.instagram.com/startalkradio/ About StarTalk: Science meets pop culture on StarTalk! Astrophysicist & Hayden Planetarium director Neil deGrasse Tyson, his comic co-hosts, guest celebrities & scientists discuss astronomy, physics, and everything else about life in the universe. Keep Looking Up! #StarTalk #NeildeGrasseTyson #NASA

Watch NASA's Perseverance Rover Launch to Mars!
Was there once life on Mars? Our Perseverance rover aims to find out! On Thursday, July 30, watch our new robotic astrobiologist launch on a seven-month journey to the Red Planet. Launching on board will be the most sophisticated set of tools ever sent to Mars, with the hope Perseverance will uncover the planet’s secrets. Tune in to our live launch broadcast starting at 7 a.m. EDT. Teams are targeting 7:50 a.m. EDT for liftoff of Perseverance atop United Launch Alliance's Atlas V rocket from Kennedy Space Center in Florida. Don’t forget to set a reminder to join us in the #CountdownToMars – you won’t want to miss this historic mission take flight! Learn more about the mission: https://mars.nasa.gov/mars2020/mission/overview/

This is NASA’s best shot at finding life on Mars
NASA’s Mars rover, Perseverance, is on its way to the Red Planet with the goal of seeking out evidence of life there. How will we know that evidence if we see it? And how can we be sure we’re not “discovering” Earth microbes that hitched a ride with the rover? Here’s what NASA’s scientists, engineers, and their “planetary protection lead” have to say. Learn more: https://bit.ly/3jS70x3 Subscribe: http://bit.ly/2FqJZMl Like Verge Science on Facebook: http://bit.ly/2hoSukO Follow on Twitter: http://bit.ly/2Kr29B9 Follow on Instagram: https://goo.gl/7ZeLvX Read More: http://www.theverge.com Community guidelines: http://bit.ly/2D0hlAv Subscribe to Verge on YouTube for explainers, product reviews, technology news, and more: http://goo.gl/G5RXGs

Mars 2020 Mission Perseverance Rover
The job of the Perseverance rover will be to seek out signs of ancient life and collect rock and soil samples for possible return to Earth. We talk to SETI Institute Mars experts Nathalie Cabrol, Janice Bishop, and Pablo Sobron about what we can expect from this exciting new mission. Hosted by Simon Steel.

Countdown to Mars: Dr. Melissa Rice
Find out why astrobiologists are excited for the launch of NASA’s Mars 2020 Perseverance Rover! In this episode, Dr. Melissa Rice discusses the ins and outs of MASTCAM-Z, Perseverance's vision system and her excitement of the unexpected. Join us at NASA Astrobiology as we countdown to Mars 2020: the launch of the Perseverance rover! Each weekday from July 1st, 2020 until launch day, we'll be showcasing some of our favorite astrobiologists who study the red planet and share why they are so excited for this upcoming mission. Created by Mike Toillion Music by Mike Toillion & Sam Doshier #CountdownToMars

Detailed plans of Tianwen-1 mission to Mars
#China has successfully launched its #Mars probe Tianwen-1 from the southern province of #Hainan. It's China's first independent Mars mission. If all goes according to plan, the rover will explore the red planet's surface for 90 days. From launch pad to landing, let's find out more about the Tianwen-1's mission to Mars. Subscribe to us on YouTube: https://goo.gl/lP12gA Download our APP on Apple Store (iOS): https://itunes.apple.com/us/app/cctvnews-app/id922456579?l=zh&ls=1&mt=8 Download our APP on Google Play (Android): https://play.google.com/store/apps/details?id=com.imib.cctv Follow us on: Website: https://www.cgtn.com/ Facebook: https://www.facebook.com/ChinaGlobalTVNetwork/ Twitter: https://twitter.com/CGTNOfficial Instagram: https://www.instagram.com/cgtn/?hl=zh-cn Pinterest: https://www.pinterest.com/CGTNOfficial/ Weibo: http://weibo.com/cctvnewsbeijing Douyin: http://v.douyin.com/aBbmNQ/

We're going to Mars! #HopeProbe
Our story started 6 years ago with an ambitious vision. It seemed to be a dream, especially to the dedicated youth. We overcame many hurdles and accomplished great milestones. Our journey had many steps but never a last stop. We’ve reached space and are now aiming for #Mars. The sky is not the limit, but just the beginning. Nothing is impossible! #EmiratesMarsMission

Live: China's inaugurates first Mars exploration mission Tianwen-1 in southern Hainan Province
2020 can be regarded as the year of Mars. Following Sunday's launch of the UAE's Mars probe, China inaugurates its first Mars exploration mission Tianwen-1 in Wenchang Space Launch Center in southern Hainan Province. After the launch via a Long March-5 carrier rocket, the Mars probe will conduct a series of tasks and explorations on the red planet. Hailed as Earth's sister planet, Mars has become the priority planet in deep space exploration. Can Mars be turned into a second habitat for humans? What will our lives be like if we settle on Mars in the future? Join CGTN to get a closer look at Mars and explore the beauty of the mysterious planet.

NASA Science Live: Perseverance Mars Rover & the Search for Ancient Life
Millions of miles from Earth lies a dusty, cold, desert world with a very thin atmosphere. You know this planet as Mars…but it hasn’t always been this way. There’s evidence that the Red Planet was much wetter and warmer, with a thicker atmosphere, billions of years ago. Could it also have supported life? NASA’s Perseverance rover launches next week and will explore the Red Planet to collect rock and soil samples, which may preserve ancient signs of life. Join experts on #NASAScience Live Wednesday, July 22 at 3:00 p.m. EDT, to learn more about this robotic astrobiologist.

Send NASA Your #CountdownToMars
NASA is inviting the public to help get ready for the upcoming launch of the Mars 2020 Perseverance Rover by joining a global, collective #CountdownToMars. Fans are asked to record video of their creative countdowns to liftoff, then share and tag them on social media with #CountdownToMars. Favorites may be featured on NASA social media and included in a compilation video on launch day. Learn more: https://go.nasa.gov/countdowntomars The scheduled launch date for the Perseverance rover is July 30, 2020. Perseverance will land on Mars Feb. 18, 2021. For more information on the rover’s mission, visit: https://mars.nasa.gov/mars2020. Credit: NASA/JPL-Caltech

6 NASA Technologies to Get Humans to Mars
NASA is advancing many technologies to send astronauts to Mars as early as the 2030s. Here are six things we are working on right now to make future human missions to the Red Planet possible. Be part of the #CountdownToMars: https://go.nasa.gov/3fH3qU1

5 Scary Facts About The Andromeda Galaxy

A 90 Year Old Theory Is Proven With Brilliant Observations

When the US Air Force Planned a Moon Landing

Hubble Trivia: 1) How Big is the Hubble Space Telescope?

Views and opinions expressed in videos or external links do not represent SPACETV.NET or our sponsors.