All listings are UTC/GMT time. 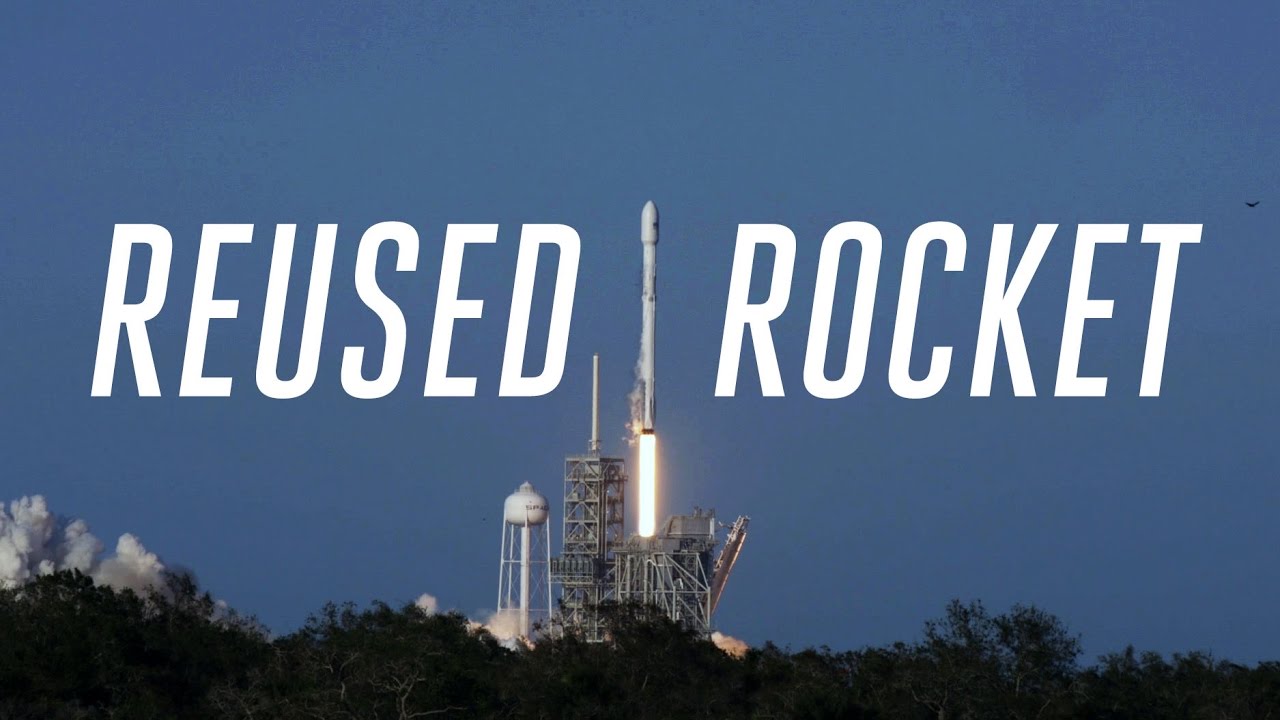 SpaceX demonstrated an important capability of its Falcon 9 rocket fleet: the vehicles are capable of launching to space multiple times and then landing again. 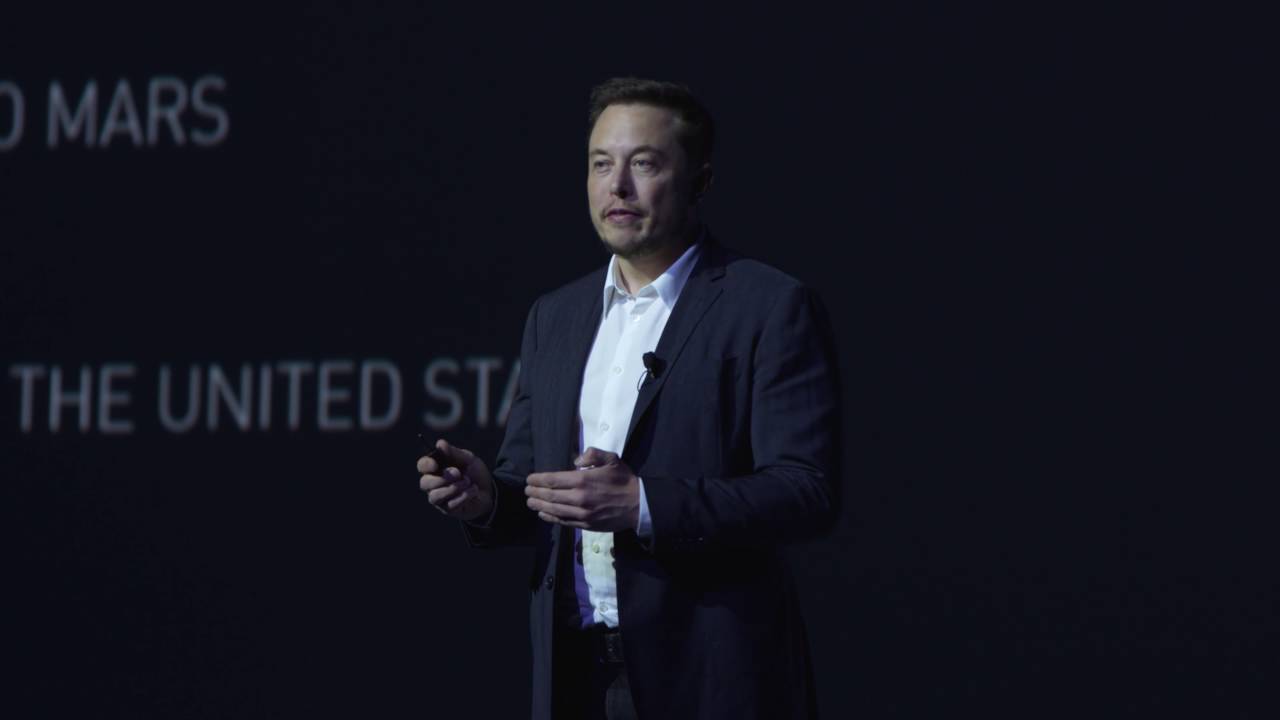 SpaceX Founder, CEO, and Lead Designer Elon Musk will discuss the long-term technical challenges that need to be solved to support the creation of a permanent, self-sustaining human presence on Mars. 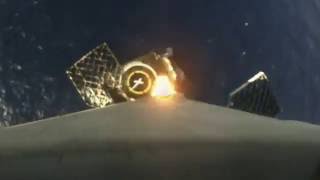 Sped up video of the Falcon 9 first-stage landing during the THAICOM 8 mission on May 27, 2016 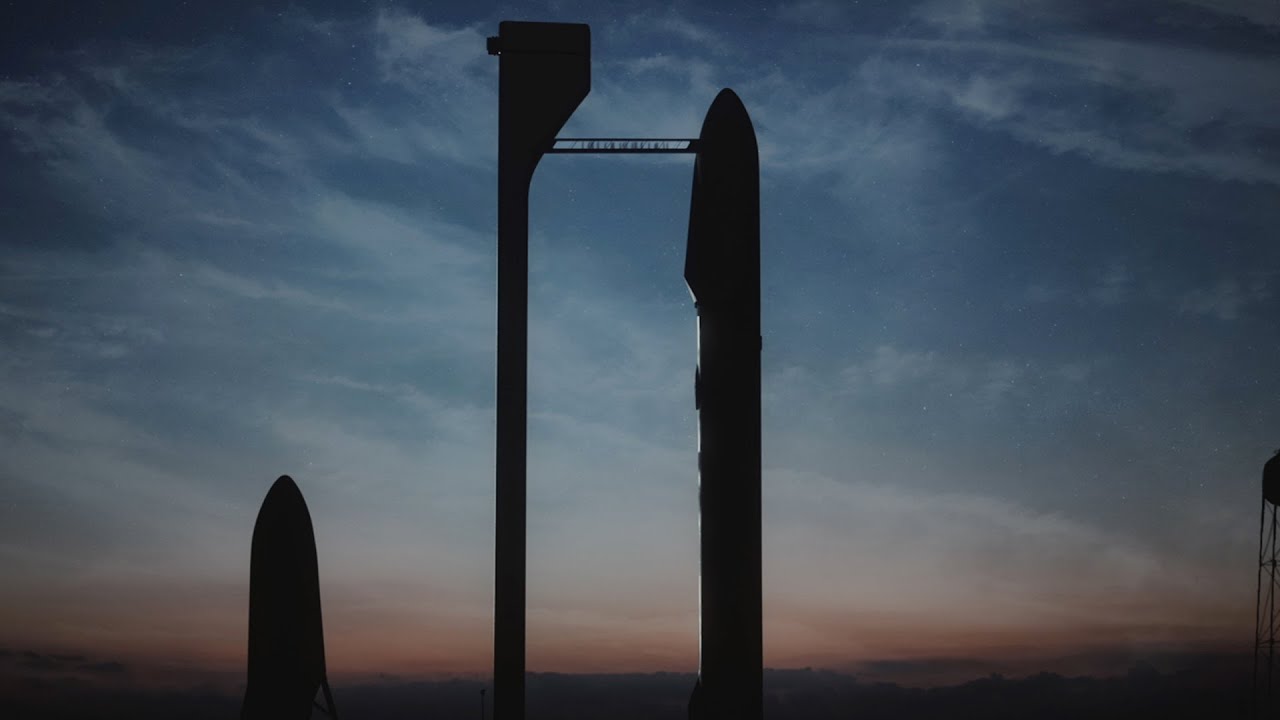 Will this be the vehicle used to take the first Humans to Mars?

SpaceX Boca Chica - Raptor SN58 Delivered - SN10 Wreckage Scrapped
Raptor Engine SN58 was delivered, with "Much Land, When Box" written on it, a new dome was sleeved, GSE 1 Fwd Fuel Dome was moved out of Tent 1, and the LR1600/2 "Tankzilla" Crane was moved next to Suborbital Pad B ahead of SN11's arrival at the launch site. Video & Photos from Mary (@BocaChicaGal). Edited by Derek “DK” Knabenbauer (@DKlarations). All content copyright to NSF. Not to be used elsewhere without explicit permission from NSF. Click "Join" for access to early fast turnaround clips, exclusive discord access with the NSF team, etc - to support the channel. Rolling Updates and Discussion: https://forum.nasaspaceflight.com/index.php?board=72.0 Articles: https://www.nasaspaceflight.com/?s=Starship NSF Store: https://shop.nasaspaceflight.com/ L2 Boca Chica (more clips and photos) from BC's very early days to today. https://forum.nasaspaceflight.com/index.php?topic=47107.0 (Join L2 and support NSF here: https://www.nasaspaceflight.com/l2/) 0:00 - LR1600/2 Crane “Tankzilla” Waiting to Lift SN11 onto Pad B 0:08 - New Dome Sleeved 0:22 - New Section About to be Lifted into Mid Bay / SN11 in High Bay 0:40 - Barrel Sections Waiting to be Stacked 1:01 - Construction Next to Orbital Launch Pad Continues 2:28 - Starship SN10 Wreckage Getting Scrapped 5:59 - Tankzilla Moved Next to Pad B 6:35 - Raptor SN58 Delivered / “Much Land Where Box” is written on it 8:08 - Earth Work Outside Build Site Fence 8:36 - GSE 1 Fwd Fuel Dome Moved Out of Tent 1 9:40 - Heavy Duty Stand Moved From Fabrication building to the High Bay/Mid Bay Area

Starlink Mission
SpaceX is targeting 3:24 a.m. EST on Thursday, March 4 for launch of 60 Starlink satellites from Launch Complex 39A (LC-39A) at Kennedy Space Center in Florida. If needed, there are backup opportunities available at 5:42 a.m. EST on Thursday, March 4, as well as 3:03 a.m. EST and 5:21 a.m. EST on Friday, March 5. The Falcon 9 first stage rocket booster supporting this mission previously flew on seven missions: the Iridium-8 mission, the Telstar 18 VANTAGE mission, and five Starlink missions. Following stage separation, SpaceX will land Falcon 9’s first stage on the “Of Course I Still Love You” droneship, which will be located in the Atlantic Ocean. One half of Falcon 9’s fairing previously flew on three Starlink missions, and the other half previously supported two Starlink missions.

Watch SpaceX launch Starship SN10, at the edge of the exclusion zone!
Timestamps: 00:00:00 - Intro 00:01:35 - Prelaunch Preview 00:06:00 - Q&A 02:30:00 - Tour of the Telescope Tracker 02:38:30 - Q&A 05:11:10 - Launch Attempt / Abort 05:15:00 - Break 08:10:35 - T - 1 Minute 08:11:35 - LIFTOFF! 08:13:45 - Engine Shutdown 1 08:14:48 - Engine Shutdown 2 08:15:54 - Apogee / Flip 08:17:30 - Flip Manuever 08:18:00 - LANDING! 08:26:13 - EXPLOSION!!! Starship SN10 will be attempting a medium altitude test flight (~10 km). It will lift off from Boca Chica, Texas under the power of three Raptor engines. At apogee, it will flip into a horizontal configuration for descent. Prior to landing, it will ignite three of its Raptor engines to initiate the landing flip before shutting one down. SN10 will attempt a propulsive landing on the landing pad, potentially becoming the first Starship prototype to successfully do so. Need to know more information? Check out our Prelaunch Preview - https://everydayastronaut.com/starship-sn10-test-flight/ #SpaceX #Starship #SN10 ------------------- Want to support what I do? Consider becoming a Patreon supporter for access to exclusive livestreams, our discord channel and subreddit! - http://patreon.com/everydayastronaut Or become a YouTube member for some bonus perks as well! - https://www.youtube.com/channel/UC6uKrU_WqJ1R2HMTY3LIx5Q/join The best place for all your space merch needs! https://everydayastronaut.com/shop/ All music is original! Check out my album "Maximum Aerodynamic Pressure" anywhere you listen to music (Spotify, iTunes, Google Play, Amazon, etc) or click here for easy links - http://everydayastronaut.com/music I'm the cohost of an awesome podcast where we talk all about current technologies and how they shape our future! http://ourludicrousfuture.com or here on YouTube https://www.youtube.com/ourludicrousfuture

Meet the Astronauts Launching on NASA's SpaceX Crew-2 Mission to the International Space Station
Watch a live Q&A with the next four astronauts launching to the International Space Station aboard the SpaceX Crew Dragon! NASA astronauts Shane Kimbrough and Megan McArthur will serve as spacecraft commander and pilot, respectively, for the mission. JAXA (Japan Aerospace Exploration Agency) astronaut Akihiko Hoshide and ESA (European Space Agency) astronaut Thomas Pesquet will serve as mission specialists.  NASA's SpaceX Crew-2 mission  is currently set for liftoff no earlier than April 20, atop a Falcon 9 rocket from Launch Complex 39A at our Kennedy Space Center in Florida. This will be Kimbrough's third trip to space, McArthur's second, Pesquet's second, and the third spaceflight for Hoshide.

Starlink Mission
SpaceX is targeting Monday, February 15 for launch of 60 Starlink satellites from Space Launch Complex 40 (SLC-40) at Cape Canaveral Space Force Station in Florida. The instantaneous window is at 10:59 p.m. EST, or 3:59 UTC on February 16. The Falcon 9 first stage rocket booster supporting this mission previously flew on five missions: Dragon’s 19th and 20th commercial resupply missions to the International Space Station, a Starlink mission, the SAOCOM 1B mission, and the NROL-108 mission. Following stage separation, SpaceX will land Falcon 9’s first stage on the “Of Course I Still Love You” droneship, which will be located in the Atlantic Ocean.

SpaceX: BUSTED!! (Part 1)
You can support this channel directly through patreon: https://patreon.com/Thunderf00t or at my amazon affiliate store: https://www.amazon.com/shop/thunderf00t or my other channel: https://www.youtube.com/channel/UCUrdmVprSahXaPKqr04VfgQ

Installing @SpaceX Starlink Satellite Internet at my Brother's Farm!
Find Josh's maple syrup here: http://lon.tv/ruggedridge - See the follow-up on his roof install here: http://lon.tv/qwmtj - My brother's farm is in a Starlink beta service area so he bought a dish and invited me up to try it out! Have questions? Ask in the comments and we'll do a follow-up video in the near future. See all referenced Starlink videos: http://lon.tv/starlink and subscribe! http://lon.tv/s VIDEO INDEX: 00:00 - Intro & Unboxing 05:06 - Dish installation and First connection 08:08 - Speed and Usability Testing 09:09 - Speedtest.net 10:02 - Web Browsing 10:21 - Youtube 11:01 - Shadow Cloud Streaming 12:34 - Ping Test 12:49 - Live Streaming to YouTube 13:25 - Video conferencing 13:43 - Wifi Calling on Verizon 14:24 - Josh's Rugged Ridge Forest Maple Syrup Subscribe to my email list to get a weekly digest of upcoming videos! - http://lon.tv/email See my second channel for supplementary content : http://lon.tv/extras Join the Facebook group to connect with me and other viewers! http://lon.tv/facebookgroup Visit the Lon.TV store to purchase some of my previously reviewed items! http://lon.tv/store Read more about my transparency and disclaimers: http://lon.tv/disclosures Want to chat with other fans of the channel? Visit our Facebook Group! http://lon.tv/facebookgroup Want to help the channel? Start a Member subscription or give a one time tip! http://lon.tv/support or contribute via Venmo! [email protected] Follow me on Facebook! http://facebook.com/lonreviewstech Follow me on Twitter! http://twitter.com/lonseidman Catch my longer interviews and wrap-ups in audio form on my podcast! http://lon.tv/itunes http://lon.tv/stitcher or the feed at http://lon.tv/podcast/feed.xml We are a participant in the Amazon Services LLC Associates Program, an affiliate advertising program designed to provide a means for us to earn fees by linking to Amazon.com and affiliated sites.

Starlink Mission
SpaceX is targeting Thursday, February 4 for launch of 60 Starlink satellites from Space Launch Complex 40 (SLC-40) at Cape Canaveral Space Force Station in Florida. The instantaneous window is at 1:19 a.m. EST, or 6:19 UTC. The Falcon 9 first stage rocket booster supporting this mission previously flew on four missions: the launches of GPS III Space Vehicle 03 and Turksat 5A and two Starlink missions. Following stage separation, SpaceX will land Falcon 9’s first stage on the “Of Course I Still Love You” droneship, which will be located in the Atlantic Ocean. One half of Falcon 9’s fairing previously flew on the SAOCOM-1B mission, and the other previously flew in support of the GPS III Space Vehicle 03 mission.

SpaceX Starship SN9 soars in test flight, has explosive landing
SpaceX launched the Starship SN9 prototype to an altitude of about 10 kilometers on its only test flight. It was destroyed during its landing attempt. -- Full Story: https://www.space.com/spacex-starship-sn9-test-flight-launch-explosion Credit: SpaceX

Starship | SN9 | High-Altitude Flight Test
On Tuesday, February 2, Starship serial number 9 (SN9) completed SpaceX’s second high-altitude flight test of a Starship prototype from our site in Cameron County, Texas. Similar to the high-altitude flight test of Starship serial number 8 (SN8), SN9 was powered through ascent by three Raptor engines, each shutting down in sequence prior to the vehicle reaching apogee – approximately 10 kilometers in altitude. SN9 successfully performed a propellant transition to the internal header tanks, which hold landing propellant, before reorienting itself for reentry and a controlled aerodynamic descent. The Starship prototype descended under active aerodynamic control, accomplished by independent movement of two forward and two aft flaps on the vehicle. All four flaps are actuated by an onboard flight computer to control Starship’s attitude during flight and enable precise landing at the intended location. During the landing flip maneuver, one of the Raptor engines did not relight and caused SN9 to land at high speed and experience a RUD. These test flights are all about improving our understanding and development of a fully reusable transportation system designed to carry both crew and cargo on long-duration, interplanetary flights and help humanity return to the Moon, and travel to Mars and beyond.

SpaceX announces first-ever all-civilian space flight crew
SpaceX announced that it will launch four private individuals on a CrewDragon capsule into orbit around the Earth, dubbed “the world’s first all-civilian mission.” It is scheduled to launch in the fourth quarter of 2021.

Magnetic Cataclysm 42000 Years Ago May Have Caused Extinction